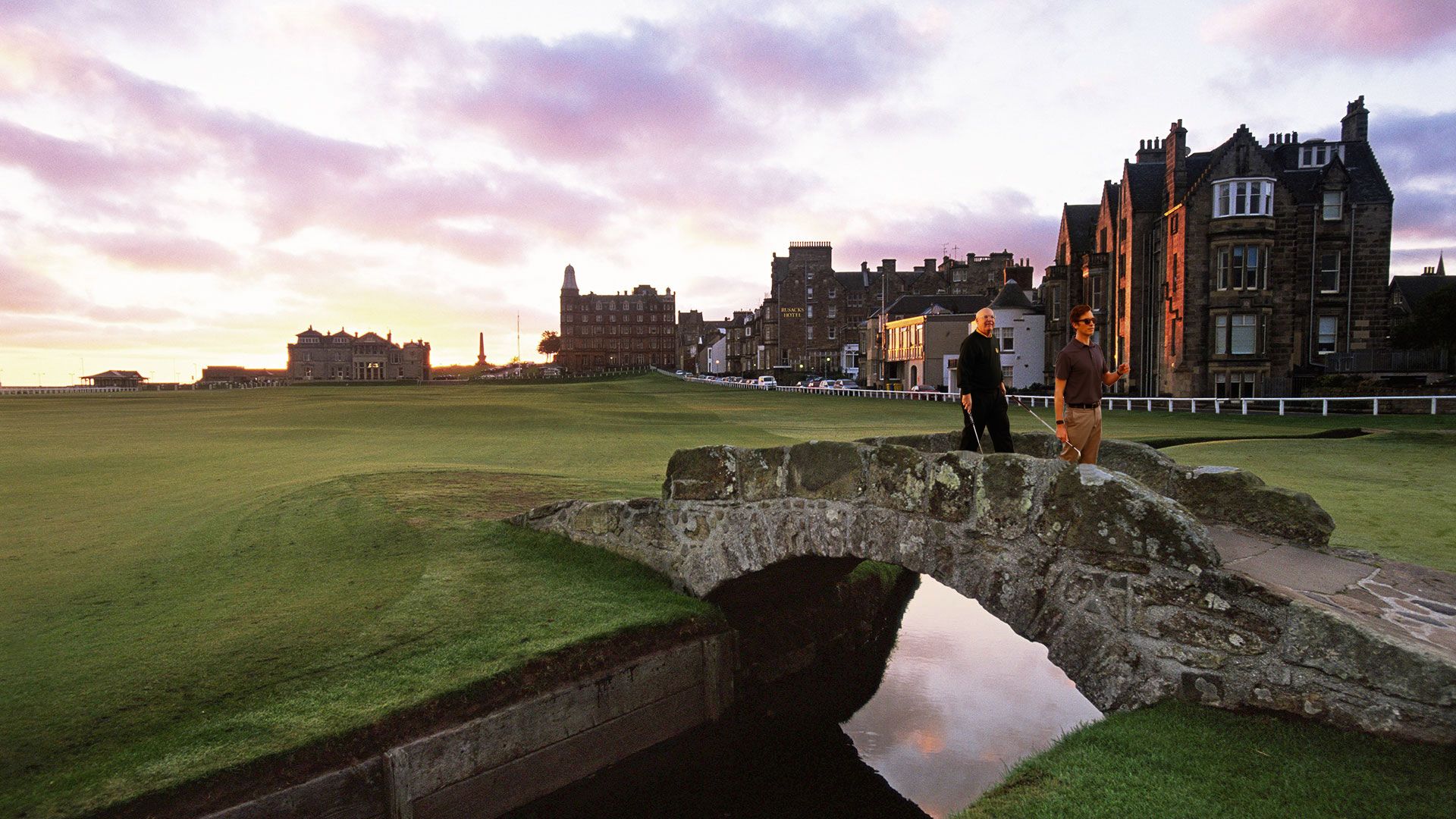 Two veteran designers have come together with a unique, shared vision for creating golf courses
PHOENIX - TelAve -- After 32 years, Forrest Richardson has had enough. No, the current president of the American Society of Golf Course Architects isn't giving up his design practice. He's merely bidding adieu to life as a sole practitioner. Richardson is pleased to announce that Jeffrey A. Danner, ASGCA, MEIGCA, ASLA has joined the firm and will serve as Senior Golf Course Architect. Known for decades as Forrest Richardson & Associates, the firm will transition to Richardson | Danner Golf Course Architects. The firm will operate from two offices, in Phoenix, Arizona and in Northern California. The enthusiasm for the move is palpable.

"It's a goal we've had for several years, to bring the right person aboard," says Richardson. "There's strength in having two golf course architects coming together to build upon a shared passion that golf must be fun, inclusive and sustainable. It's especially effective when one golf course architect is older and has 'seen it all,' and when the other is experienced, but younger, with a fresh perspective.  Jeff fits the bill perfectly. He's a young guy, but he has already done so much. We see great promise with Jeff and his abilities to create a bigger and better offering for our clients and the world of golf."

Danner is similarly attuned. "Our personalities, skill sets and approach to things really complement each other, which provides a huge value to clients," says Danner. "We offer a combination of rich and diverse experience. Certainly Forrest has seen just about everything, but I've seen a lot, too, in my 16 years in the business, especially with different cultures, climates and site conditions around the world. It gives a client the best bang for the buck when you have two people on the design team who can bounce ideas off each other. It's a win-win to have that type of collaborative environment."

Indeed, Richardson comes from a perspective of having experienced every design trend, environmental movement and economic condition. He's designed dozens of traditional, regulation golf courses, yet in recent years, he's been renowned for his out-of-the-box solutions to complex issues. In 2019, a leading trade industry publication, Golf Inc. lauded Richardson as one of the nine most innovative figures in golf, stating that he "evangelized for values like affordability, sustainability, playability and enjoyability which challenged conventional wisdom."

One of his most impactful projects saw Richardson wave his redesign wand at the Palo Alto, California municipal layout in 2018, reconfiguring it into Baylands Golf Links. For its $12 million investment, the city received a golf course that's much more enticing than its predecessor. It features imaginatively contoured greens, requires less water and incorporates new wetlands and natural habitat. What's more, says Richardson, is that he redesigned the layout in such a way that he gave back ten acres of land to the city for use as soccer fields and other park uses.

More on TelAve News
"It would have cost $50 million dollars for the city to buy that much land," says Richardson. "And that's if ten acres of land were even available—which it wasn't. Today they have that ten acres to use for something other than golf, and it is a point of pride in the community."

Always forward-looking, Richardson champions the role he and the ASGCA have played in effecting positive change on golf's environmental impact.  "We did that at the highest levels of government regulation," he told Links magazine early in 2021. "Golf courses are now accepted as appropriate buffers to wetlands and sensitive habitat. We're continually challenging the notion that everything that goes into a golf course must be complicated and costly—it doesn't. We've invested research in using less water, less labor, and working on how courses can accommodate disabled players and be more flexible."

Clearly, Richardson's emphasis on environmental awareness, access and inclusion in course design was a powerful magnet for Danner. Prior to joining Richardson | Danner, Jeff worked as an architect for Greg Norman Golf Design in Florida and held previous design positions for Lohmann Golf Designs and Golfplan, both based in the U.S. He has worked in or traveled to more than 30 countries and has contributed to many award-winning new construction and renovation projects. What resonates with him most, however, are the special projects that expand access to more golfers.

In Illinois, he assisted on taking an old driving range plot and transforming it into a five-hole pitch-and-putt practice range combo that was handicap-accessible to those in wheelchairs. "Those types of projects are exciting," says Danner, "when you get to work with an organization that's out to serve the greater good."

On the Black Sea in Turkey, Danner helped create a course by diverting a lot of heavy fill material and muddy soil to reclaim the site, building an interesting, links-landish canvas in the process. The course would go on to host the Deaf Olympics. Richardson shares the passion for global design. He has spent quality time working to grow golf through planning projects in such places as El Salvador, Albania, Bulgaria and most recently, in Libya. "Golf has a powerful message of respect and social interaction," he says. "We cannot forget that the game brings people together, and very often that lasts a lifetime."

"I believe that golf needs to be more inclusive," says Danner. "I've always been excited to be working on public access courses, probably because I grew up around public golf. Sustainable golf is more than environmental stewardship. Without inclusivity and golfer participation, golf isn't a viable business. It all goes hand in hand."

More on TelAve News
As a boy, Danner created golf holes in his family's backyard, experimenting with various weighted whiffle balls. Richardson, too was a backyard designer, at age 8. Both men studied in Scotland, Richardson in a program hosted at the University of Dundee in Fife and Danner as part of his postgraduate studies through the European Institute of Golf Course Architects (EIGCA). Today Danner is one of only three golf architects in the world to hold membership in the ASGCA and the EIGCA.

In a remarkable coincidence that likely proved a precursor to the present relationship, Richardson played an integral role in influencing Danner's career, if indirectly. "Early on in my professional life, I had done a lot of remodel work, but not as much that required routing," says Danner. "I picked up Forrest's book (Routing the Golf Course: The Art & Science That Forms the Golf Journey). That book taught me the basics of how to route a golf course. There's nothing more rewarding than putting the routing puzzle together and feeling like you've got it. At a 2007 golf show, Forrest was kind enough to sign that book for me. Another reason I'm so excited about this venture was that Forrest was there at the beginning of my career."

For Richardson, the new arrangement brings about a welcoming déjà vu. When he first hung his shingle in 1988, the firm he founded evolved from a longtime association with the late Arthur Jack Snyder, himself a past president of the ASGCA.

"From the time I first met 'Jack,' as he preferred to be called," said Richardson, "it marked the beginning of a friendship and mentorship that lasted 32 years. That first meeting (in 1972, when Forrest was 13) fueled my growing passion for golf course architecture."

Richardson and his mentor collaborated for 20 years. Together, their work includes more than 70 completed projects that range from multi-course facilities to short and intimate par-3 layouts. Perhaps this is a case of a career coming full circle. By welcoming Jeff Danner into the fold, Richardson is sensing that same feeling of anticipation and discovery that washed over him as a kid.

"'Golf was meant to be fun'—Jack repeated this to clients, colleagues and me," said Richardson. "It was his mission statement and trademark, and I've held onto it."

"My specific design philosophy has always been to work with the land to create a memorable golf experience that is a fun, fair test," says Danner.

Together, Forrest Richardson and Jeff Danner—Richardson | Danner—plan on having a lot of fun crafting compelling, sustainable, occasionally outside-the-box courses that are a joy to play. As Richardson puts it, "The largest canvas in the world of art is golf design, and we want to be brave in our solutions because that is what will bring about change—change that makes a difference."